↓ Skip to Main Content
Home › COVID19 › Welcome to My Desk! What I’ve Done to Stay Grounded During COVID-19

Welcome to My Desk! What I’ve Done to Stay Grounded During COVID-19 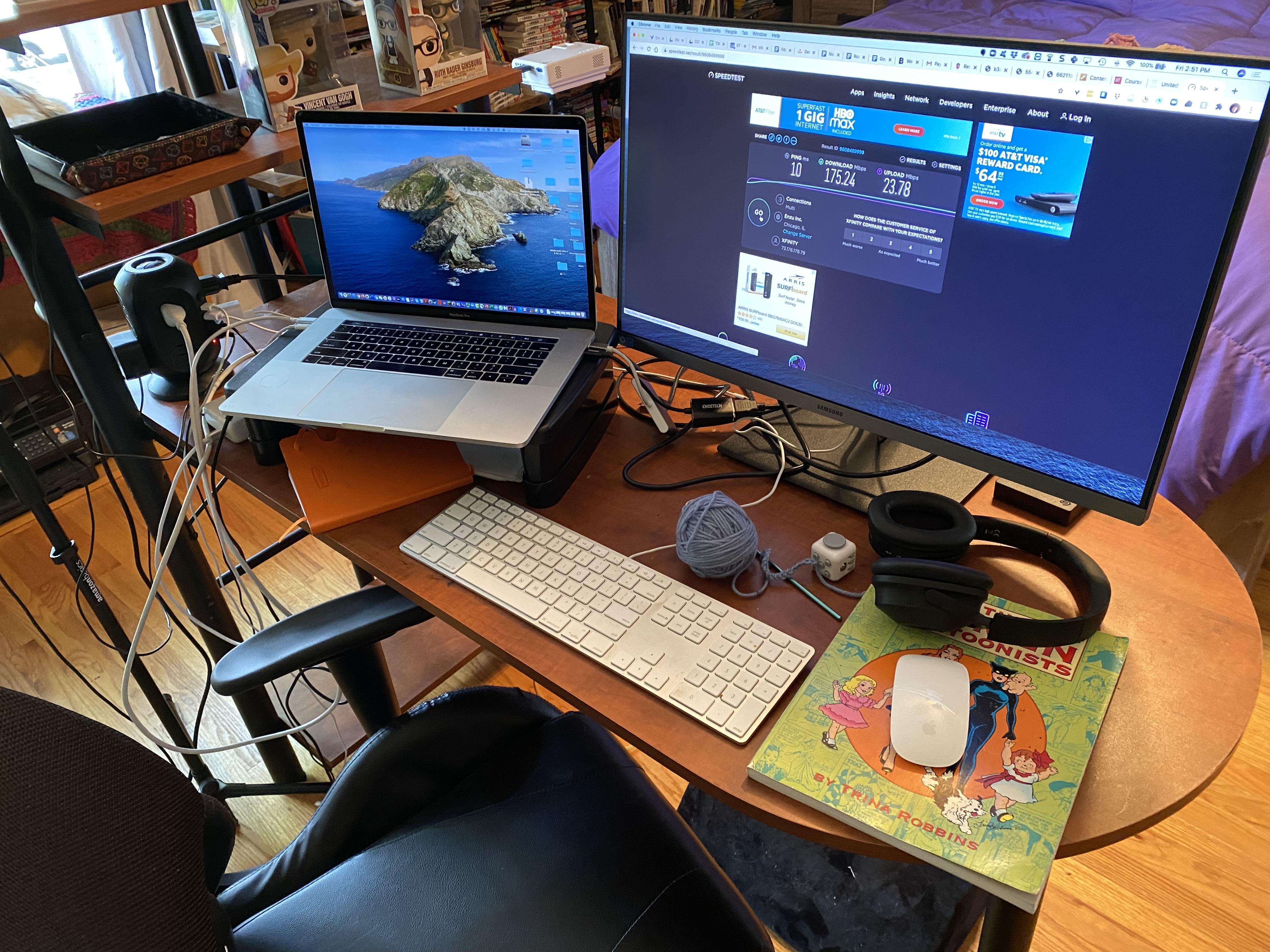 Getting Started on my Desk

On March 12, the local schools closed.  On March 13, I went to the office for a meeting, packed some things, and went home. I’ve been WFH ever since.

The first thing I did when I got home was to arrange my desk for work.  Before it had been used for storing important papers that I would look at someday very soon.  Those are now in a box.  I will look at them very soon.

My desk is in my room, which I know isn’t “best practice.”  If you can, set up your workspace in a separate room.  But I only have so many rooms and my other choices were in my basement, which doesn’t have windows.  Windows are important – they tell me what time of day it is.

There are also two children and 2 cats.  This is important.

When setting up my desk, I had to consider several issues:

My current set up addresses most of these issues.  The internet could be faster.

On March 13, I grabbed what I thought would be most important: The Yeti microphone, the Yeti stand, some cables, my Lexis mugs (you know which ones), and my good tea.  I did not grab my mouse and my keyboard.  I immediately regretted that.  One of my colleagues was able to rescue them before Chicago-Kent shut down.  I’m so glad she did – the laptop keyboard was not sustainable for avoiding pain in my shoulders and hands.

After I came home, I asked my son for one of his many monitors.  He tried to give me an old 20″ but that didn’t work. Sorry kid, one of your three 27″ monitors was going to be mine for a while.  You’d survive with a 20″ for your 3rd monitor.  Once I cleared my desk, set up the monitor, and placed the Yeti, I was ready to record many, many training videos. Not to mention all of my other work.

Over the next few months, I had to make a few adjustments.  The original chair was killing my back, so I got the kind of chair that my kid uses for gaming.  I wanted to try to make a green screen work, which meant I had to move my desk in front of a wall.  I’ve moved this desk at least 3 times.

I’ve crowded this on/near my desk: Sometimes I use my iPad as a 3rd monitor, but my desk is a bit small to make it work well.  Also, various kids who already have iPads often steal mine.  I also always have my phone with me, because I do.

At one point, I had a 2017 Windows laptop for testing, but the original owner took that back (I had taken his monitor, too, after all).

I have a printer.  Getting it to work is a pain, so it’s sat in a corner this whole time.  “I’m out of color ink.” “I’m printing in black and white- why does that matter?” “Didn’t you hear me, I’m out of color ink and refuse to budge until you pay a lot of money to replace it!”  Printers: not worth the trouble.

Furniture for My Desk Who’s paying for all this?  Well, me.  But this is what I spend my money on in any case, so most of these things I was going to get at some point, or already had.  Then again, some people have 9 monitors and use those (that’s too many for me to track).  In some cases, your work may pay for your WFH needs, such as adequate home internet connections or computers and supplies.

Most of the individual solutions I’m using aren’t pricy (except the MacBook…). If even one or two can help you get organized – or save you some aches and pains – give them a try.  It may be that you’ll be working from home for a long time.  You should be set up for your productivity and comfort.  And not kill your budget.

So CS, AALL, and anyone else- what’s on your desk?

By the way, if you think I’m causing my kids grief by taking their stuff, they aren’t exactly hurting: Boy: 2019 custom gaming computer that cost less than the MBP, 3 monitors, 2017 Windows laptop, 2012 MacBook Pro Minecraft server, Surface 3, iPad Mini, Chromebook for school, mini Yeti, VR, various mini-game consoles, Xbox One, Apple Watch, phone, and a bunch of stuff I don’t even remember. The VR, the Xbox, and the Windows laptop are supposed to be communal but somehow wound up in his room.